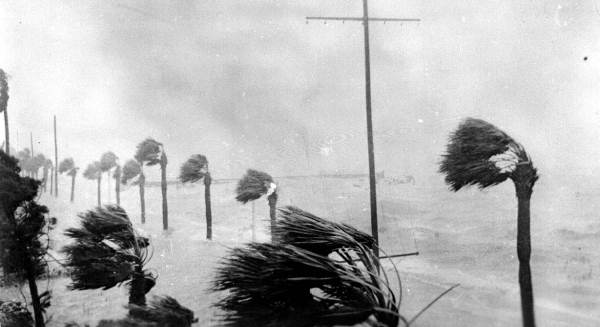 It’s December 1st, which means that we’ve officially survived another hurricane season here in Saint Augustine. Many are still recovering from both Hurricanes Matthew and Irma, so we’re already crossing our fingers for a reprieve next year. 2017’s hurricane season was certainly one of the more eventful in recent memory, but just how many hurricanes has St. Augustine seen in its over 450 year history? It’s hard to say exactly, since the definition of a “hurricane” has evolved and become more specific as meteorologists better understand weather patterns. Regardless, the Ancient City has no doubt seen its fair share of stormy weather. We dove into the records in the Governor’s House Research Library and found mention of many storms over the years.

The first recorded hurricane in Saint Augustine might have occurred just days after Pedro Menendez de Aviles’ landing. Menendez was sent to the New World with a mission to remove French forces from North Florida, who had established Fort Caroline near present day Jacksonville despite the fact that Florida was Spanish-owned land. Menendez landed in St. Augustine with his fleet of settlers and soldiers on September 8, 1565. A few days later, French ships from Fort Caroline sailed down to the new Spanish settlement with the intent of attacking. However, they were led off course by one of Menendez’s ships, which was sailing back towards Puerto Rico.

On September 12, a strong storm struck the coast of Northeast Florida. The French ships, out at sea, were not able to return to shore. Despite the inclement weather, Menendez saw this as a stroke of luck for the Spanish and an opportunity to attack a significantly weakened Fort Caroline. Through the hurricane, Menendez and his men marched on foot to the French fort, finally arriving on September 20th and successfully reclaiming Florida as a Spanish colony under King Phillip II.

Whether it was truly a hurricane or not, the storm of September 1565 played a significant role in the success of St. Augustine in its earliest years of settlement. If not for this “huracan”, we might not be the “Oldest City in America”.

One thought on “Saint Augustine’s First Hurricane? The Storm of 1565”