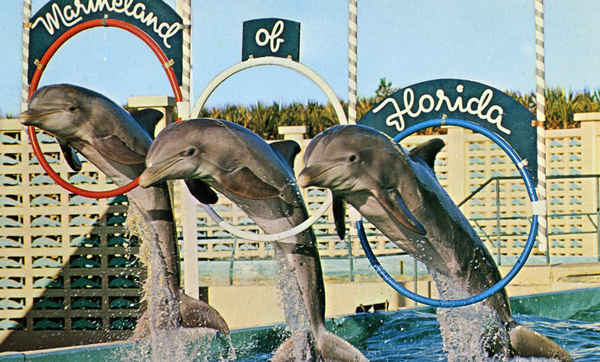 Today we’re traveling down A1A South to Marineland Dolphin Adventure. You may know it as the home of dolphins and other marine life, but did you know that this site has a rich 82 year history of movie making and marine biology? Today we’re going to dive into the history of the world’s first oceanarium!

Marine Studios opened in June 1938. The studio facility was designed to attract Hollywood filmmakers, allowing them to shoot underwater footage for feature films and newsreels. It was founded by Douglas Burden, Sherman Pratt, Ilia Tolstoy (grandson of Leo), and Cornelius Vanderbilt “Sonny” Whitney. The studios were also opened for visitors to view the marine life housed in the facility and became a top tourist attraction for the state immediately. Over 30,000 Floridians traveled to Marineland on its opening day!

Marine Studios was a resounding success in its first decades of operation, both in attracting tourists to visit the marine life and in attracting filmmakers to utilize its technology. Some of the motion pictures filmed partially or fully at Marine Studios include Creature From the Black Lagoon (1954), Revenge of the Creature (1955), Zaat (1975), and Benji Takes a Dive at Marineland (1981). The facility continued to grow and become a true vacation destination, adding the Marine Village Court motel, the Dolphin Restaurant and Moby Dick Lounge, and a variety of gift shops and snack bars. In the height of its popularity Marine Studios also attracted stars of the literary world, including Marjorie Kinnan Rawlings, Ernest Hemingway, and John dos Passos.

In addition to becoming a major tourist attraction, Marineland also became a center for the study and conservation of marine life. Founder C.V. “Sonny” Whitney was instrumental in the opening of the University of Florida’s Whitney Laboratory for Marine Bioscience, located across the street from Marine Studios. Whitney’s wife Marylou was very involved in the St. Augustine community and served as a member of the Historic St. Augustine Preservation Board.

Marineland’s success began to decline after the opening of other major theme parks in Florida attracted tourism toward central Florida. After sustaining damage from two hurricanes in 1999, Marineland closed, but reopened in 2006 with updated facilities that focused on education and marine life encounters for guests. Today, you’ll enter a wonderful world of dolphins and other marine life and learn about the important conservation work happening to protect and preserve these sea creatures and their natural habitat for years to come.

We encourage you to take a trip down A1A and visit Marineland Dolphin Adventure this summer. To learn more about all of their exciting programs, visit their website at marineland.net, or visit their new history museum at the Oldest House Museum Complex in downtown St. Augustine!

One thought on “Marineland: Where Movie Stars and Marine Life Met”