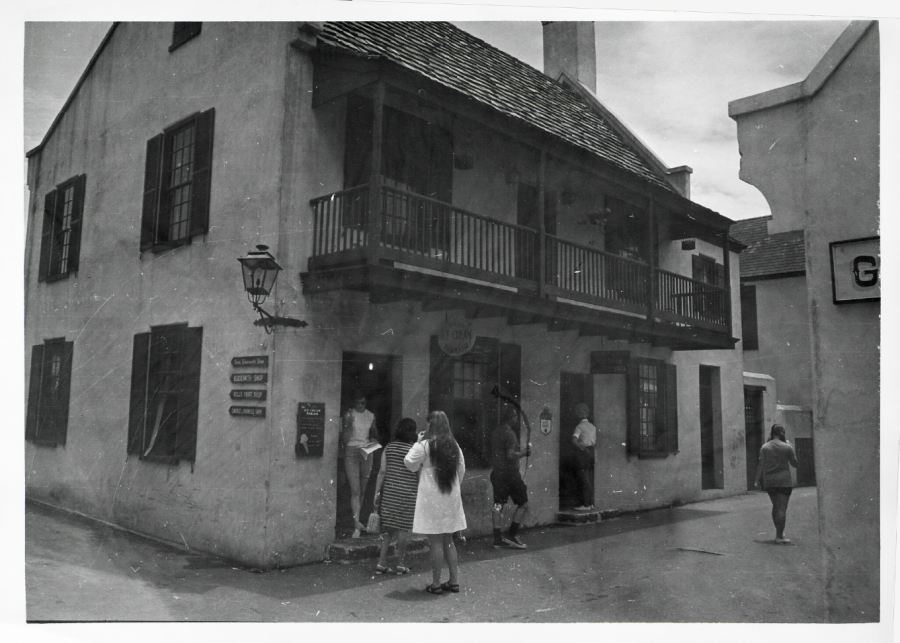 Have you ever stopped by Tedi’s Olde Tyme Ice Cream on St. George Street? Long before serving sweet treats, the site was home to the Benet family and their store. Let us take a scoop into the past of 65 St. George Street.

Located on the southeast corner of Cuna and St. George Streets, the first documented structure on the property appears on a 1764 map of the town, which describes a “masonry house belonging to Pedro Zapata.” The house changed hands multiple times over the following years. Sometime before 1782, a wooden house replaces the masonry structure, which remains made-of wood until 1804. That year Don Estaban Beneto (Benet), a Minorcan refugee and merchant, purchases the property and constructed a two-story coquina home, where he lived with his wife Catarina Hernandez and four children. Their son Peter (or possibly Pedro) Benet inherits the property, as he appears as the owner on a 1834 survey.

Peter Benet served in a number of roles in local politics – gaining the nickname “Boss” and “King Benet.” He, also, operated a store on the ground floor of his home until purchasing 62 St. George Street in 1839 – as evidenced through taxes he paid on stock at $16 per year for shop licenses. Benet applied for leave to move his shop from his house to his new building as recorded in the City Council Minute Book of October 13, 1840. The structure continues to serve as the home of the Benet family, which consisted of Peter, his wife Juana Hernández, and their ten children. Their daughter Isabel Benet eventually inherits the property in 1884, which would be demolished shortly after her death in 1915.

As part of Quadricentennial preparations, the St. Augustine Restoration Commission began reconstructing the Benet House in January 1964. In their reconstruction efforts, the Commission used early photographs, historic research, and recollections of surviving members of the Benet family. The project aimed to reconstruct the house as it appeared in the early 1800s. While tearing down a 20th-century structure on the site, the Commission discovered some of the house’s original walls, a large number of coquina blocks, and hand-hewn lumber. Completed within the year, the Commission rented the top floor as an apartment and leased ground floor to local businesses.